The Newbury Academy Trust is a company limited by guarantee and an exempt charity. It is responsible for Trinity School, Fir Tree Primary School and Speenhamland Primary School. The Trust is governed by Members, Trustees (Directors) and Local Governors, as illustrated on the right. 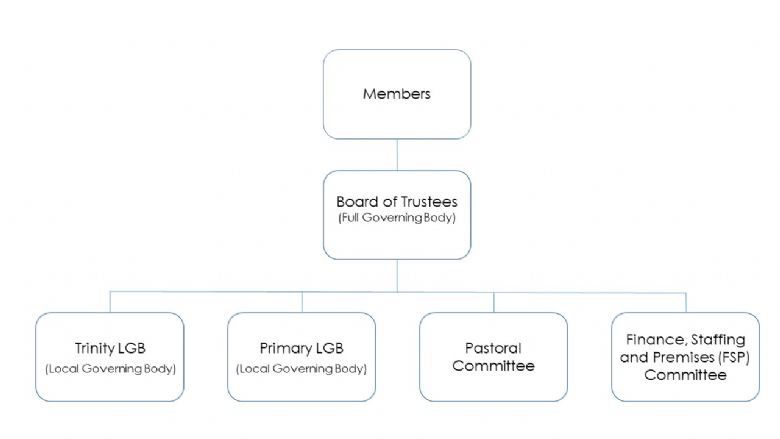 The Members as the subscribers to the Memorandum of Association established the Trust. The Board of Trustees is the accountable body. At school level Trinity School has a Local Governing Body, whilst Fir Tree and Speenhamland are jointly governed by the Primary Schools’ Local Governing Body.

The Board of Trustees has also established a Finance, Staffing and Premises Committee, made up of Trustees and local governors. The Committee is advised by the CEO, Finance Manager and the trust Business Manager.

Panels including a ‘Staff Hearings, Dismissals and Appeals Panel’ and a ‘Student Discipline Committee’, also meet from time to time as required.

The governance structure is reviewed annually.

Sheila Loy, Paul Dick and Nick Cornish were the founding Members of the Newbury Academy Trust. They have subsequently appointed Lynne Ellis as a Member.

The Members are the only body that can change the Articles of Association (subject to DfE approval). They appoint some of the Directors and have the right to remove them. The role of Members is ‘eyes on, hands off’ and there is a clear distinction between their role and that of the Trustees.

The Board of Trustees may exercise all the powers of the Academy Trust. They are directors at company law and charity trustees and as such are subject to the duties and responsibilities of both roles. They are responsible for the general control and management of the administration of the Trust in accordance with the provisions set out in the memorandum and articles of association.

Whilst the Board of Trustees is ultimately responsible for the quality of education in the Newbury Academy Trust and for ensuring the Trust achieves its targets, it delegates some responsibilities to the LGBs. The LGB’s have two strategic functions delegated to them:

The LGBs meet four times a year to a timetable set by the Trustees. Whilst the Associate Headteachers attend the meetings they do not have voting rights or count towards the quorum.

The NAT committees undertake a similar function to the LGBs but in respect of financial, premises and staffing matters, and another committee focusing on the pastoral matters. The Directors appoint the members of the committee from across the Trust’s governance structure.

The Associate Head Teachers of each school have responsibility for the day to day running of that school.

The Executive Headteacher and the Associate Headteacher hold the other members of the senior leadership team to account for the effectiveness of their work. Members of the senior leadership team hold staff to account through their day-to-day discussions and observations of learning, and through a performance management process that covers all staff.

Whilst this overview sets out the broad areas of responsibility and procedure, the Trust also has a separate detailed ‘Scheme of Delegation’.